Summary Analog devices such as the radio, the television and the telephone already had increased the amount of shared human information since the beginning of the 20th century. Shared human information again dramatically increased since the end of the 20th century when digital devices such as personal computers and mobile phones became widespread. These digital devices were increasingly often linked by the World Wide Web and led to numerous and profound changes in working environments and living habits. 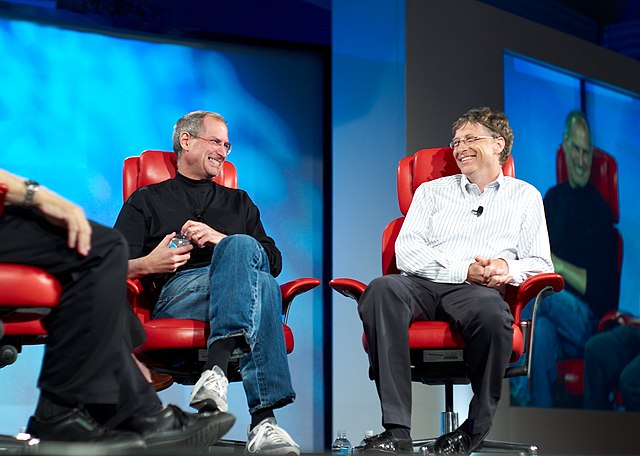 Chairman of Apple Steve Jobs (left) and chairman of Microsoft Bill Gates (right) during a conference in California in 2007. The companies Apple and Microsoft, both being founded in the 1970s, shaped the Digital Revolution significantly. (© Joi Ito / Wikimedia Commons / CC-BY-2.0)

Techniques of sharing information have been pivotal in human history. The creation of shared imaginations by the efficient usage of spoken language has been at the center of the Cognitive Revolution since about 70,000 years ago, which enabled our species Homo sapiens to spread over the whole planet. The invention of writing in Mesopotamia and Egypt more than 5000 years ago and the invention of printing in China 1000 years ago were other milestones on the way towards more efficiently shared information. The setup of a worldwide telegraphic network by the British Empire during the second half of the 19th century – this included the first transatlantic submarine communications cable in 1858; the cable from London via Egypt, India and Singapore to Adelaide in Australia in 1871; and the first cable around the whole globe, called the All Red Line, in 1902 – then revolutionized long-distance communication.

Other analog techniques followed in the 20th century: Broadcasting of radio waves, which led to the usage of radios and of television, was realized since around 1900. Since the 1950s the radio and television were very widespread in North America, Western Europe and Japan. In 1956 the first transatlantic telephone cable (TAT-1) was installed, which in contrast to the former telegraphic copper cables required signal amplifiers along its path. Since the end of the 20th century, however, the Digital Revolution, during which personal computers and mobile phones became widespread, led to profound changes in working environments and living habits of human societies. The Digital Revolution predominantly originated from the United States, and here in particular from the Silicon Valley close to San Francisco in California.

Personal computers from companies such as IBM and Apple were increasingly sold in the 1980s and became ubiquitous in the 1990s. In 2000 about half of the households in the United States possessed a personal computer, and most of them used a Windows operating system from Microsoft. Also other areas were affected by the digitalization: Since 1982 compact discs (CDs) gradually replaced analog formats such as vinyl records and cassette tapes as the major storage medium for music, and the first true digital cameras were developed in the late 1980s. 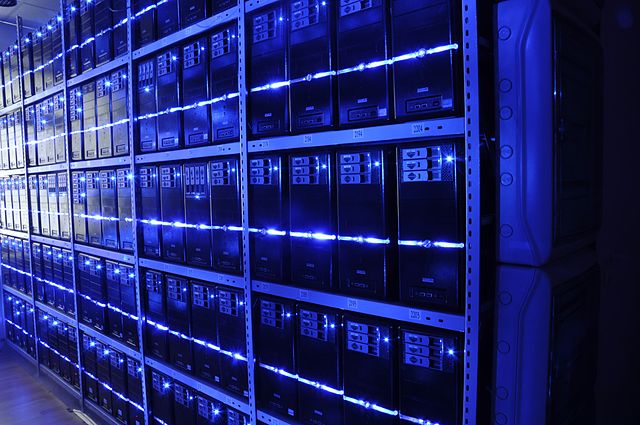 A data center in the early 21st century. The size of data centers grew with the amount of data stored in the World Wide Web. It is estimated that in 2017 data centers were responsible for about 3% of the worldwide electricity consumption, with an increasing trend. (© User:Fleshas / Wikimedia Commons / CC-BY-SA-3.0)

Not only did personal computers become more and more widespread, they also became increasingly interconnected. While the internet and emails originated from about the 1960s, the World Wide Web was invented by Tim Berners-Lee at CERN in 1989 and marked a real breakthrough. It became publicly accessible in 1991 and grew at a fast rate: While in 1994 less than 10% of the population in the developed world were internet users, in 2004 they were around 50%. The expansion of the World Wide Web was assisted by the development of fiber optical cables which allowed a higher data transmission rate if compared to older cables, and in 1988 the first transatlantic submarine fiber optical cable was laid (TAT-8). Today fiber optical cables are the hardware communication backbone of the internet, not satellite networks. Also the development of digital data storage devices was crucial, and nowadays the whole ancient Library of Alexandria can be stored in a USB stick which is smaller than a human finger.

Several websites were created in the World Wide Web in the following years, many of which now belong to famous companies: the online retailer Amazon in 1994, the search engine Google in 1998, the online encyclopedia Wikipedia in 2001, the social media platform Facebook in 2004, the video-sharing website YouTube in 2005 (acquired by Google in 2006), and the online news platform Twitter in 2006. All these developments had numerous influences on the economy and the societies: For example, Facebook had 1 billion monthly active users in 2012 and 2 billion monthly active users in 2017. In the early 2000s mobile phones became as ubiquitous as computers, and around that time the Digital Revolution also spread to the developing world. In 2007 the first iPhone from Apple was launched, which had a touchscreen and offered access to the internet. In 2009 and 2010 the social networking applications WhatsApp and Instagram were founded (both soon acquired by Facebook), and in 2016 smartphones and tablets surpassed desktops in internet usage for the first time.