Summary Mammals became the dominant terrestrial vertebrates during the Cenozoic Era (66 Ma – today). They also populated the oceans as whales and dolphins, with the extant blue whale being the heaviest known animal which ever existed. While global temperatures peaked 55 million years ago during the Paleocene-Eocene Thermal Maximum, the climate cooled afterwards and led to the glaciation of Antarctica at the South Pole and of Greenland close to the North Pole. 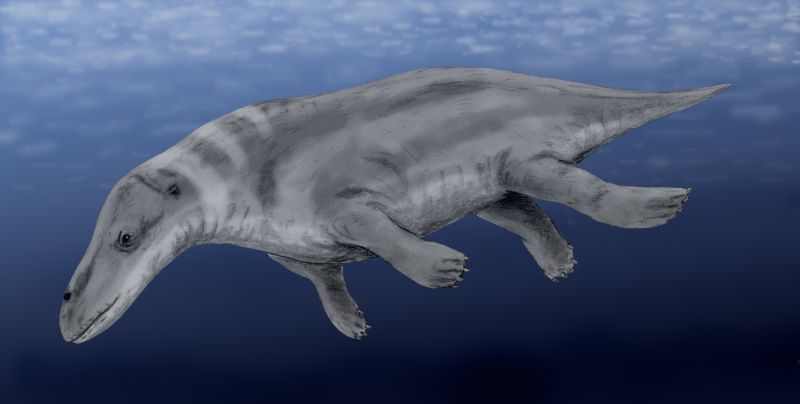 The Cretaceous-Paleogene extinction event, which had extinguished most species with a body weight of more than 25 kilograms, marks the beginning of the ongoing Cenozoic Era (66 Ma – today). The Cenozoic Era is also known as the Age of Mammals, which as warm-blooded animals came to replace the mostly cold-blooded reptilian dinosaurs as the dominant terrestrial vertebrates, and which increasingly occupied ecological marine niches. All mammals ultimately originated from small mouse-like creatures which survived the Cretaceous-Paleogene extinction event. During the Cenozoic Era also birds – which had evolved from dinosaurs in the Jurassic Period (201-145 Ma) – became increasingly common, and the living bird species now outnumber the living mammal species by a factor of two.

During the early Cenozoic Era, the mammals’ body sizes increased significantly and fast. While mammals typically did not reach the sizes of their reptile predecessors – as warm-blooded animals they would otherwise boil from the inside –, the mammalian marine blue whale, with a length of up to about 30 meters and a weight of up to about 170 tons, became the heaviest animal known to have ever existed. The ancestors of whales, as well as of dolphins, used to live on land 50 million years ago and gradually descended into the sea, where they lost their legs and became larger and larger.

Woolly mammoths, equids, a woolly rhinoceros and European cave lions during the late Pleistocene Epoch (2.6 Ma – 11.7 ka). The climate had become significantly colder after parts of the northern hemisphere were periodically covered with glaciers since 2.6 million years ago. (© Mauricio Antón / Wikimedia Commons / CC-BY-2.5)

Global temperatures were usually warmer than today during large parts of the Cenozoic Era, with the maximum being reached at an around 8 °C higher average global temperature around 55 million years ago. After this so-called Paleocene-Eocene Thermal Maximum carbon dioxide levels in the atmosphere dropped and the climate cooled down. While the Earth’s polar regions were ice-free during long times of Earth’s history, the Antarctic ice sheet at the South Pole started to form around 34 million years ago, and it reached its current extent 14 million years ago. Since about 2.6 million years ago Greenland, which is close to the North Pole, was covered with an ice sheet, and parts of the northern hemisphere were periodically covered with expanding and retreating glaciers during the so-called glacial and interglacial periods. The cooling climate facilitated the spread of grasses on land, which in turn was connected to the emergence of elephants, cats, dogs and marsupials during the Oligocene Epoch (34-23 Ma). The glaciation of parts of the northern hemisphere marks the beginning of the ongoing Quaternary Period and is seen as the beginning of the current Ice Age (the Quaternary glaciation), after the Earth had been ice-free at at least one of its two poles for more than 250 million years.

In the Pleistocene Epoch (2.6 Ma – 11.7 ka) plenty of mammalian megafauna was present, such as mammoths, saber toothed cats, cave bears and dire wolves. Soon they were accompanied by the first humans.