Summary After the Permian-Triassic extinction event 252 million years ago reptiles dominated the food chains on the continents, in the oceans and in the skies. The terrestrial dinosaurs, the aerial pterosaurs and the marine ichthyosaurs, plesiosaurs and mosasaurs could attain gigantic sizes. The Age of Reptiles then came to an end by an asteroid impact on Earth 66 million years ago. 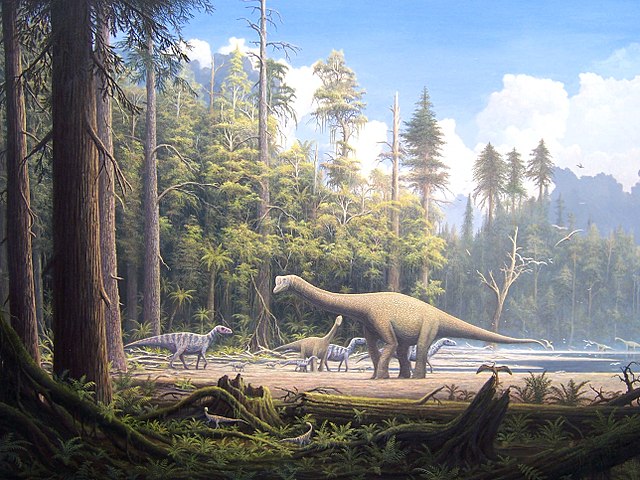 The Permian-Triassic extinction event marked the beginning of the Mesozoic Era (252-66 Ma). The Mesozoic Era is known as the Age of Reptiles, as during that time reptiles – which originated from the late Carboniferous Period (359-299 Ma), usually laid hard-shelled eggs and had skins covered with scales – grew to large sizes and dominated the food chains on the continents, in the oceans and in the skies.

Reptiles became the dominant terrestrial vertebrates during the Triassic Period (252-201 Ma) in the form of archosaurs (“ruling reptiles”), a group of diapsid amniotes which were the ancestors of dinosaurs and crocodilians. The dinosaurs (“terrible reptiles”), one reptile clade, then evolved from archosaurs around 230 million years ago and became the dominant terrestrial vertebrates after the Triassic-Jurassic extinction event 201 million years ago, throughout the Jurassic Period (201-145 Ma) and the Cretaceous Period (145-66 Ma). Most dinosaurs were cold-blooded, with a few smaller warm-blooded exceptions. They can be classified into saurischian (“lizard-hipped”) and ornithischian (“bird-hipped”) dinosaurs. The saurischian dinosaurs include the theropods, for example the carnivorous 12 meters long and about 10 tons heavy Tyrannosaurus (“tyrant reptile”), and the sauropods, such as the herbivorous 33 meters long and more than 30 tons heavy Supersaurus (“super reptile”). The ornithischian dinosaurs were largely herbivorous and include Triceratops (“three-horn face”) and Stegosaurus (“roof reptile”).

Reptiles also dominated the oceans, as ichthyosaurs (“fish reptiles”) and plesiosaurs evolved. Both these reptile clades evolved from terrestrial ancestors which returned to the sea – just as the whales did later. During the late Cretaceous Period Mosasaurs became the dominant marine predators. 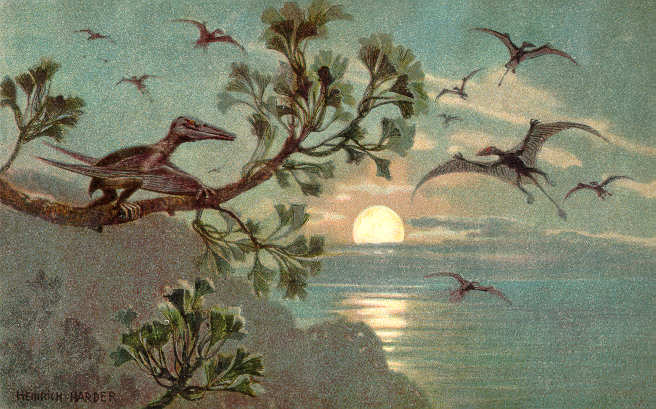 Another reptile clade, the pterosaurs, were the first vertebrates to master powered flight about 230 million years ago. One pterosaur example of the late Cretaceous Period is the gigantic Quetzalcoatlus, which had a wingspan of about 16 meters. Birds evolved from small feathered saurischian theropods in the Jurassic Period, with Archaeopteryx being one early evolutionary link. While conifers were widespread during the Mesozoic Era, they were replaced by flowering plants as the dominant land plants in the late Cretaceous Period.

While ichthyosaurs already became extinct 90 million years ago, dinosaurs, plesiosaurs, mosasaurs and pterosaurs became extinct during the Cretaceous-Paleogene extinction event 66 million years ago, which was probably caused by a combination of an asteroid impact into today’s Chicxulub crater in the Gulf of Mexico and by volvanic eruptions at the site of the Deccan traps in today’s India. Small birds and mammals survived, and they could thrive in the following Cenozoic Era (66 Ma – today), the Age of Mammals.