Summary Since the decades around 1800 coal was started to being widely used as an energy source in Britain, which led to marvels such as a mechanized textile production, railways and steamboats. This process was accompanied by a human population boom and by a dramatic increase of the speed of innovations, and the large-scale usage of coal was soon adopted by France, Germany, the United States, Russia and Japan. That energy bonanza is called the Industrial Revolution, and its importance in human history is only comparable to the one of the Agricultural Revolution of about 12,000 years ago.

Just as the Agricultural Revolution, which started about 12,000 years ago in the Fertile Crescent, the Industrial Revolution, which started about 200 years ago in Britain, took the history of humankind to a new level. While during the Agricultural Revolution humans learned to use the energy of domesticated plants and animals for their needs, during the Industrial Revolution they started to tap the vast ocean of energy which became available when burning fossil fuels. This new energy bonanza had far-reaching impacts on the human societies and on the Earth as a whole.

In the beginning of the Industrial Revolution, about 200 years ago, primarily coil was burnt, large parts of which had been formed a few hundred millions of years ago during the Paleozoic Era of Earth’s history. The efficient combustion of coal became possible by the steam engine which was improved by the British inventors Thomas Newcomen in 1712 and James Watt in 1769. Inventions like the steam engine became possible by the Scientific Revolution which had previously taken place during the 17th century in Europe which established globe-spanning empires during the Early Modern Period. The steam engine was used in the mining industry and in mechanized factories, with one important early example being the British textile energy. Manchester was known as Cottonopolis during the early 19th century, and the mechanized British textile manufacturing eventually destroyed the Indian industry of hand-woven cloth. Also the iron and steel production in Britain grew rapidly, and the speed of innovations in general increased dramatically.

An increased standard of living, vaccinations and a decreased childhood mortality led to a rapid population growth in the industrializing countries, a trend which would soon spread over the whole globe. Apart from the general population growth, as agriculture became more and more mechanized, for the first time since the Agricultural Revolution farmers represented not the majority of the people anymore in the industrialized countries. Many former farmers moved to the fast-growing cities and became factory workers. London, the capital of Britain, had about 1.5 million inhabitants in 1825 and surpassed Beijing as the largest city of the world. It remained at the top position for about a century, now having 8 million inhabitants, when it was surpassed by New York in the United States. 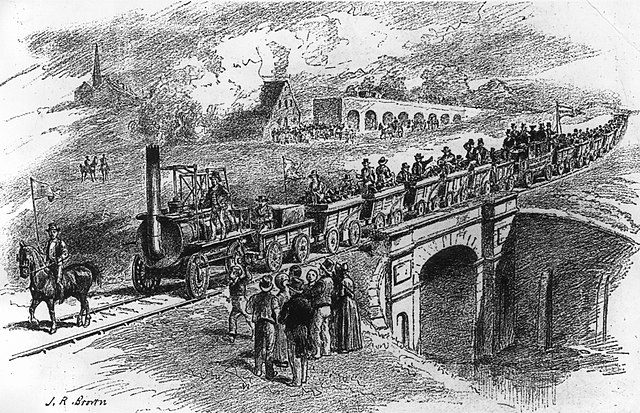 The Stockton and Darlington Railway in England in 1825. New means of transportation like this one, which relied on the steam engine, revolutionized the transport systems worldwide. (© J.R. Brown (1850-1918) / Wikimedia Commons / Public Domain)

Also global transportation networks reached a new level of speed and efficiency in the wake of the Industrial Revolution. The railway soon became the most powerful means of transportation by land –replacing the domesticated horses and camels –, with two groundbreaking railway projects being the transcontinental railroad in the United States in 1869 and the Trans-Siberian Railway in Russia in 1916. On the sea steamboats gradually replaced the former sailboats and became the most powerful means of transportation by sea, being manifest by the expanding transatlantic steamboat networks in the 1870s. Also petroleum was soon widely used as an energy source and further improved transportation methods.

The Industrial Revolution subsequently enabled industrialized states to dominate world politics. In the 19th century the dominating power worldwide was the British Empire, which was the birthplace of the Industrial Revolution, together with other European states such as France, Germany and Italy. Later in the 20th century the United States, the Soviet Union (Russia) and Japan joined the European states as powerful industrialized international actors.