Summary The Universe was created 13.8 billion years ago with the Big Bang. It was very small and hot in the beginning, and it became larger and cooler by its continuous expansion since then. Since a fraction of a second after the Big Bang all things consist of 12 elementary particles, and all change is caused by four fundamental interactions.

An artist's impression of the observable Universe. From the center to the edge are shown: the Solar System, the Milky Way with its Perseus Arm, nearby galaxies, the Cosmic Web and the Cosmic Microwave Background. Distances are not to scale. (© User:Unmismoobjetivo / Wikimedia Commons / CC-BY-SA-3.0)

The Universe was created 13.8 billion years ago with the Big Bang, which happened everywhere at the same time and created time, space and energy. The idea that the Universe had a beginning with a small size was suggested by the ongoing expansion of the Universe, which was first observed by American astronomer Edwin Hubble in 1929. He measured that, on the large length scale of billions of light-years (tens of millions of billions of billions of meters or 1025 m), the farther an object is located from us the faster it moves away from us. The light-year is an often used unit of length in astronomy and equal to the distance which light travels through vacuum in one year. The logical conclusion that the Universe should have started in a very small volume at a given point in time is called the Big Bang Theory (which shall not be confused with the TV series of the same name). While up to then in cosmology – the science of the origin and the evolution of the Universe – the Universe was understood as being static and eternal, the Big Bang Theory was widely accepted in the scientific community since the 1960s. A beginning of the Universe in combination with the finite speed of light results in the observable Universe having only a finite radius beyond which there is nothing to be seen, which corresponds to astronomical observations. It shall be noted that, while the Big Bang Theory is nowadays generally accepted, the reason for the Big Bang remains unclear.

According to the Big Bang Theory, the Universe was extremely small and hot in the beginning – much smaller than a single atom –, and it became larger and cooler by its continuous expansion since then. Its size was rapidly increased by a process called inflation shortly after its creation. Within the first picosecond after the Big Bang – the millionth part of the millionth part of a second (10-12 s) – the single universal interaction which acted on all particles sequentially splitted into the four fundamental interactions of physics today. After a picosecond the radius of the Universe was about today’s distance of Earth to Sun, and its temperature was about a million billion Kelvin (1015 K). 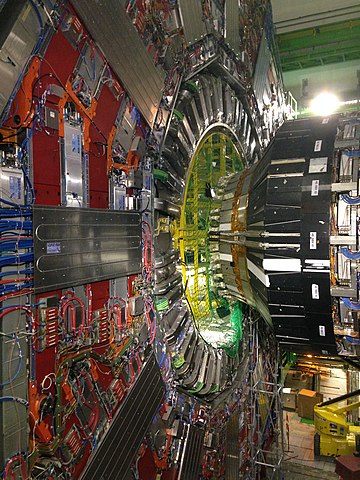 The Compact Muon Solenoid (CMS) detector in France, being part of the Large Hadron Collider. Detectors like this one contributed much to humankind’s understanding of particle physics and of Big Bang cosmology.
© Photographed by User:Tighef / Wikimedia Commons / CC-BY-SA-3.0

As temperature is related to the motional energy of particles, particle energies in that early time were extremely high. To get a glimpse of the violent processes short after the Big Bang, it is such useful to study collisions of high-energy particles. The currently most energetic human-made particles were created at the Large Hadron Collider, which is a particle collider at the European Organization for Nuclear Research (CERN) in Switzerland and France and is considered to currently be the largest machine in the world. As of the beginning of 2019, the record particle energy is 6.5 trillion electron-volt (6.5 TeV), which corresponds to about the motional energy of a mosquito which consists of huge amounts of particles. This energy was the average particle energy short before the completion of the first picosecond after the Big Bang.

While in the 19th century Western natural scientists believed that atoms were the elementary building blocks of matter, through particle colliders and other research it soon became clear that atoms are actually composite bodies made up of smaller particles. The elementary particles and fundamental interactions are since the 1970s described by the Standard Model of Particle Physics: Most of matter is made up of six quarks – the up, down, charm, strange, top and bottom quarks. Additionally, there are six leptons – the electron, the electron neutrino, the muon, the muon neutrino, the tau and the tau neutrino. These totally 12 elementary particles gain their masses through interactions with the Higgs boson, which was theoretically predicted in 1964 and experimentally observed in 2013. Additionally, all the 12 elementary particles have respective anti-particles which have the same masses but opposite electric charges and other quantum properties. If a particle and its anti-particle collide with each other, then they get annihilated in a burst of energy.